In spite of what the name may suggest, Chaos Engineering is a disciplined approach of identifying potential failures before they become outages. Ultimately, the goal of Chaos Engineering is to create more stable and resilient systems. There is some disagreement in the community about proper terminology, but regardless of which side of the Chaos Engineering vs Resilience Engineering debate you come down on, most engineers probably agree that proper implementation is more important than naming semantics.

Creating resilient software is a fundamental necessity within modern cloud applications and architectures. As systems become more distributed the potential for unplanned outages and unexpected failure significantly increases. Thankfully, Chaos and Resilience Engineering techniques are quickly gaining traction within the community. Many organizations – both big and small – have embraced Chaos Engineering over the last few years. In his fascinating ChaosConf 2018 talk titled Practicing Chaos Engineering at Walmart, Walmart’s Director of Engineering Vilas Veeraraghavan outlines how he and the hundreds of engineering teams at Walmart have implemented Resilience Engineering. By creating a robust series of “levels” or “stages” that each engineering team can work through, Walmart is able to progressively improve system resiliency while dramatically reducing support costs.

This blog series expands on Vilas’ and Walmart’s techniques by diving deep into the five Stages of Resiliency. Each post examines the necessary components of a stage, describes how those components are evaluated and assembled, and outlines the step-by-step process necessary to move from one stage to the next.

This series also digs into the specific implementation of each stage by progressing through the entire process with a real-world, fully-functional API application hosted on AWS. We’ll go through everything from defining and executing disaster recovery playbook scenarios to improving system architecture and reducing RTO, RPO, and applicable support costs for this example app.

With a bit of adjustment for your own organizational needs, you and your team can implement similar practices to quickly add Chaos Engineering to your own systems with relative ease. After climbing through all five stages your system and its deployment will be almost entirely automated and will feature significant resiliency testing and robust disaster recovery failover.

NOTE: The remainder of this article will use the term team to indicate a singular group that is responsible for an application that is progressing through the resiliency stages.

Before you can begin moving through the resiliency stages there are a few prerequisite steps you’ll need to complete. Most of these requirements are standard fare for a well-designed system, but ensuring each and every unique application team is fully prepared for the unknown is paramount to developing resilient systems.

Microservice and clustered architectures favor the scalability and cost-efficiency of distributed computing, but also require a deep understanding of system behavior across a large pool of services and machines. Robust observability is a necessity for most modern software, which tends to be comprised of these complex distributed systems.

Continuous monitoring is critical to catch unexpected behavior that is difficult to reproduce, but at least historically, monitoring has largely focused on measuring “known unknowns.” By contrast, a highly-distributed system often requires tracking down, understanding, and preparing for a multitude of “unknown unknowns” – obscure issues that have never happened before, and may never happen again. A properly observable system is one that allows your team to answer new questions about the internals of the system without the need to deploy a new build. This kind of observability is often referred to as “black box monitoring,” as it allows your team to draw conclusions about unknowable events without using the internals of the system.

Most importantly, high observability is critically important when implementing Chaos Engineering techniques. As Charity Majors, CEO of Honeycomb, puts it, “Without observability, you don’t have ‘chaos engineering’. You just have chaos.”

Start by documenting every application dependency that is required for the application to function at all. This type of dependency is referred to as a critical dependency.

TIP: Not sure which failover scenarios to expect or plan for? Unable to determine if a dependency is critical vs non-critical? Consider running a GameDay to better prepare for and test specific scenarios in a controlled manner. Check out How to Run a GameDay for more info.

The final prerequisite is to determine how non-critical dependency failures will impact the system. Your team may not necessarily have failover procedures in place for non-critical dependencies, so this process can be as simple as testing and documenting what happens when each non-critical dependency is unavailable. Be sure to gauge the severity of the failure impact on the core application, which will provide the team with a better understanding of the system and its interactions (see Recovery Objectives). 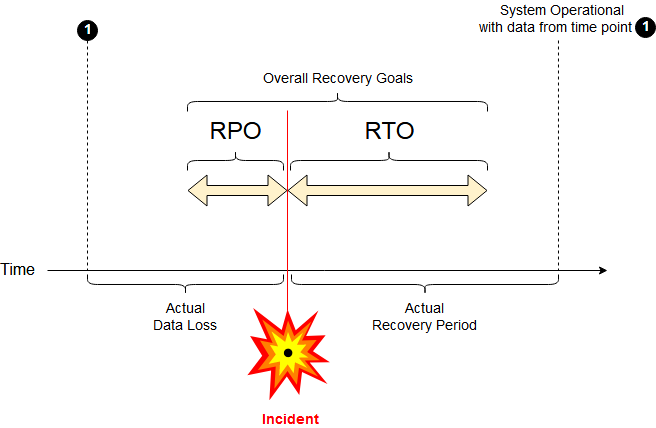 Ensure that all Prerequisites have been met. All playbooks, dependency definitions, and other relevant documentation should be placed in a singular, globally accessible location so every single team member has immediate access to that information. Maintaining a single repository for the information also maintains consistency across the team, so there’s never any confusion about the steps in a particular scenario or what is defined as a critical dependency.

With unfettered access to all documentation, the next step is to ensure the entire team agrees with all documented information as its laid out. If there is disagreement about the best way to approach a given failover scenario, or about the risk and potential impact of a non-critical dependency failure, this is the best time to suss out those differences of opinion and come to a unanimous “best” solution. A healthy, active debate provides the team with a deeper understanding of the system and encourages the best ideas and techniques to bubble up to the surface.

While the goal is agreement on the playbooks currently laid out, documentation can (and should) be updated in the future as experiments shed new light on the system. The team should be encouraged and empowered to challenge the norms in order to create a system that is always adapting and evolving to be as resilient as possible.

The last step is to manually perform a failover exercise. The goal of this exercise is to verify that the disaster recovery failover playbook works as expected. Therefore, the step-by-step process defined in the playbook should be followed exactly as documented.

WARNING: If an action or step is not explicitly documented within a playbook then it should be ignored. If the exercise fails or cannot be completed this likely indicates that the playbook needs to be updated.

Throughout this series, we’ll take a simple yet real-world application through the entire staging process to illustrate how a team might progress their application through all five resiliency stages. While every application and system architecture is unique, this example illustrates the basics of implementing every step within a stage, to provide you with a jumping off point for staged resiliency within your own system.

The Bookstore example application is a publicly accessible API for a virtual bookstore. The API includes two primary endpoints: /authors/ and /books/, which can be used to add, update, or remove Authors and Books, respectively.

Bookstore’s architecture consists of three core components, all of which are housed within Amazon Web Services. 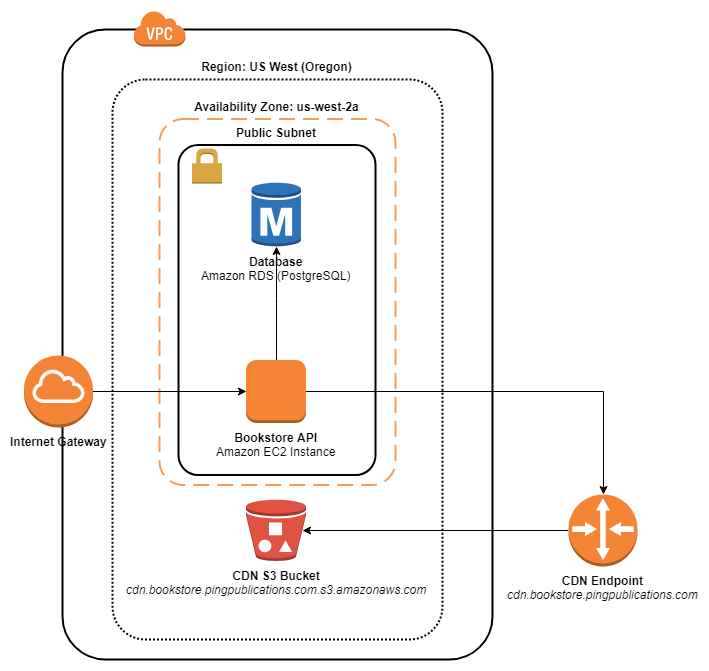 The web API is at the publicly accessible http://bookstore.pingpublications.com endpoint. The web API, database, and CDN endpoints are DNS-routed via Amazon Route53 to the underlying Amazon EC2, RDS, and Amazon S3 buckets, respectively.

Here’s a simple request to the /books/ API endpoint.

WARNING: The initial design and architecture for the Bookstore sample application is intentionally less resilient than a full production-ready system. This leaves room for improvement as progress is made through the resiliency stages throughout this series.

We begin the example implementation by defining all prerequisites for the Bookstore app.

It may be useful to take a moment to define the basic components of the system, which can then be referenced throughout your playbooks. Below are the initial services for the Bookstore app.

At this early stage of the application, all dependencies are critical.

A criticality period is useful for dependencies that are only considered “critical” during a specific period of time. For example, a database backup service that runs at 2:00 AM PST every night may have a criticality period of 2:00 AM - 3:00 AM PST. This is also a good time to evaluate initial acceptable RTO and RPO values. These values will decrease over time as resiliency improves, but setting a baseline goal provides a target to work toward.

The Bookstore app is so simple that it doesn’t have any non-critical dependencies – if a service fails, the entire application fails with it.

The first part of a disaster recovery failover playbook should contain contact information for all relevant team members, including the services those members are related to and their availability.

To define the proper notification procedures it may help to add an organizational chart to the playbook.

This can be used in conjunction with the contact information table to determine which team members should be contacted – and in what priority – when a given service fails.

The current architecture of the Bookstore app is limited to a manual Backup & Restore disaster recovery strategy.

PURPOSE: The severity level of this particular failover. Severity should be a general indicator of acceptable RTO/RPO metrics, as well as how critically dependent the service is.

PURPOSE: Indicates the basic assumptions that can be made during the recovery process. Assumptions are typically factors outside of your control, such as third-party vendor availability.

PURPOSE: Indicate the specific technologies, platforms, and services that are necessary to complete the recovery procedure.

PURPOSE: Indicates the test procedures necessary to ensure the system is functioning normally.

All prerequisites for the Bookstore app have been met and all documentation has been dispersed among every member of the team.

Every team member has agreed on the playbook/scenarios defined above.

For this stage of the Bookstore app, we’ve manually performed the Scenario: Bookstore API Failure exercise.

Full manual restoration of the bookstore-api EC2 instance and the Bookstore app resulted in approximately 30 minutes of downtime. This is well under the initial RTO/RPO goals so we can reasonably update the playbooks. However, this manual process is still clunky and prone to errors, so there’s plenty of room for improvement.

This post laid the groundwork for how to implement resilience engineering practices through thoughtfully-designed dependency identification and disaster recovery playbooks. We also broke down the requirements and steps of Resiliency Stage 1, which empowers your team to begin the journey toward a highly-resilient system. Stay tuned to the Gremlin Blog for additional posts that will break down the four remaining Stages of Resiliency!

You may also enjoy